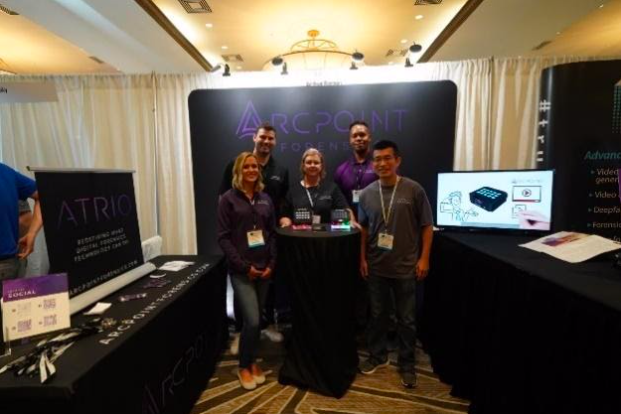 ArcPoint made our industry debut in June as a Gold Sponsor at the Techno Security & Digital Forensics Conference in Myrtle Beach. With around 50 booths and 700 participants, Techno is tightly focused on digital forensics, with participation by all the key industry players and attended by a strong segment of ArcPoint’s target customers. Booth traffic was nearly non-stop at all times. (Our unscientific assessment was that ours may have been the busiest booth at the show!) There was a lot of buzz about ArcPoint and ATRIO and high interest in what we are doing. We designed our booth in an open concept, inviting participants in to see ATRIO close up, demo its user interface, and learn about its features. Reaction was exactly what we hoped for, with overwhelmingly positive feedback and high interest from federal, military, law enforcement, and private sector cyber incident response firms.  People were especially impressed with how easy it is to use, while offering so many functions.  And they are excited about a DF tool they can hold in the palm of their hand and take anywhere. There wasn’t any other product at Techno that offered this combination of advantages.

We will be following up this success at Techno Denver from August 2-4, where we will be doing a full product demo.  If you missed us in Myrtle Beach, come see us in Denver!

Casing and Design.  We have nearly finalized ATRIO’s “look and feel”, selecting a Nylon 12, carbon fiber-infused casing. It has a substantial, rugged feel to it and will hold up to the abuse of field operations. We also added a small LCD screen to provide user feedback on progress as ATRIO does its work. We still have a few design tweaks to make, but we’re really happy with how it’s coming along

User Interface. Our vision for a simple, push-button UI has come to fruition! The tactile button panel shows all of ATRIO’s options and helps users easily identify the functions they need, with selected features immediately changing colors when a choice is made. With a few additional refinements, the UI is going to be everything we envisioned it to be!  Check out the whiteboard explainer video on our website entitled “ATRIO’s Button Panel” in the “How to Use ATRIO” section.

Automation woes? There’s a great (though not well documented) way to automate creating a GPT partition table from the command line. You can use percentages to indicate how much of the drive will be included. Adding 0% followed by 100% will automate the creation of the partition table for the entire drive without requiring user interaction. The command looks something like this: “parted -a optimal /dev/sda mklabel gpt mkpart primary ntfs 0% 100%“. This is a great tip for scripted and automated tools!